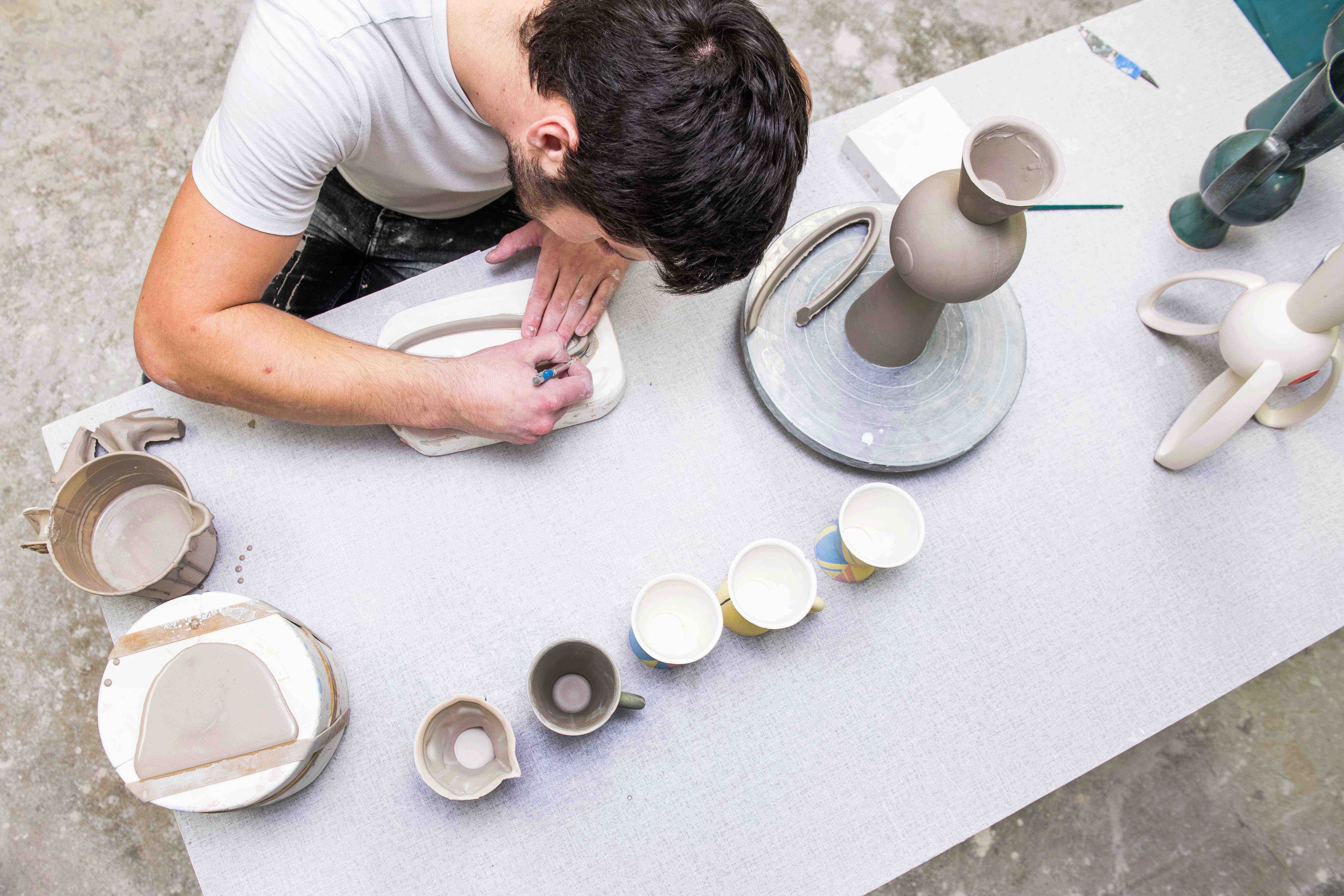 The student creates ceramic works at the intersection of technology, art and design

Mikey Gambino combines advanced technology with the ancient art of ceramics. Gambino is a fifth-year student from Mount Prospect, Illinois, double majoring in Industrial Design and Studio Arts Ceramics option. He applies technology and the consumer-focused mindset of industrial design to enhance his ceramic artwork.

“People have always used the tools available to them, and it influences what they do, what they do and how they think. I’m no different here,” Gambino said.

He is focused on integrating 3D printing into mold making to achieve the shapes he envisions and speeding up the traditionally time-consuming mold making process. He explained that the traditional process requires many steps in order to make a smooth and usable plaster mold. But, he’s experimenting with a way to speed up this process by 3D printing a master mold that can be used to make many more plaster molds that are each immediately usable.

3D printed molds also help Gambino create the specific shapes he wants in his work. “I have a big thing with geometry,” he says. “I strive for that kind of geometry in my wheel throwing work, but it’s not as precise.” In addition to 3D printing, Gambino used laser cutting to make tools with extremely precise shapes. He uses these tools to create the exact, clean geometric shapes he desires.

With these geometric shapes, Gambino strives to create functional and utilitarian pieces. “I want to make it practical and beautiful because there’s no reason it shouldn’t, really. And I want my work to do something. I want people to interact with it.

Gambino takes a piece out of a mold he made. He uses 3D printing to help create molds that produce the geometric shapes he seeks.

When he started at RIT, Gambino specialized solely in industrial design. But ceramics was one of his longtime passions. His father had been a ceramics enthusiast for much of his life, and when Gambino became interested in art himself in high school, he and his father took the opportunity to start a small ceramics store in their basement. -soil to foster their mutual love for craftsmanship.

When he entered college, Gambino turned to industrial design as a field that could be more practical while still allowing him to be artistic. This, however, did not satisfy him. “I realized that if I didn’t study ceramics at the college level, I would regret it forever,” he said.

Gambino is in his final year at RIT and working on his capstone projects. He doesn’t have any firm plans after graduation, but he knows he wants to continue using his skills in technology, art and design. “In recent years, I realized that ceramics was the passion. It’s something I can see myself doing for the rest of my life.

Learn more about Mikey Gambino in the short film “Throw Your Own Way” by Heather Shields, a sophomore in New Media Design.